This page is for people looking for info on using XBox 360 Rock Band instruments on DTXMania (and other music simulators). Anyone who wants to contribute info for the PS3 and Wii instruments are welcome to.

Drummania is a drumming music video game series produced by Bemani, the musical division of Konami Digital Entertainment, Inc. It was first released in 1999 as an arcade game, then subsequently ported to the Sony PlayStation 2 in Japan in 2000 as a launch title. DrumMania uses a modified Yamaha DTXPRESS electronic drum-kit for.

I'll be compiling information I find about the subject on this page, so it may change from time to time. - Billkwando, 12/6/08

DTXMania is a free Drummania/Guitar Freaks simulator that you can run on your PC.

This page isn't intended to be an exhaustive reference on DTXMania, as I am by no means an expert. The idea is to compile all the useful information I can find that you might not find easily without extensive searching. In case you've been away for a while, the main DTXMania community site (outside of Japan), GDAMania, is back.

For more info on Drummania in general, see Wikipedia

(right-click and do 'save as')

I personally recommend version 067b080323, as I heard there are issues with .NET Framework on the newest version. All of my instructions here refer to .67b

You can get the Starter Pack, which is crammed with free songs, here. It's a very slow download, so you'll need to give it some time. It also comes with a version of DTXMania, but I don't care for it cos it has no colored lanes. You can just copy the DTXFiles.Starter folder into your regular song directory. Also, the english readme file, written by Meow, is here. It's for an older version, but it's the only one I could find.

Put your songs (unzipped) in a folder called 'DTXFiles'. If you want to arrange them into subfolders, name your folders 'DTXFiles.whateveryouwant'. You can have as many of these subfolders as you like, and you can place them inside the main DTXFiles folder. You can also change difficulty (on songs w/ multiple difficulties) by tapping the hi-hat twice.

For songs, the best place I know of is GDAMania.net. Load up on L'arc~en~Ciel and Zone (on the files page, in 'Japanese'). Zone is particularly useful for getting the hang of the game, cos they're easy and catchy. Who can resist girls rocking out in Kimonos? (right click) The GDAMania forum is back. You can find info there, and new simfiles are posted almost every day.

I've also recently started making simfiles. You can find them here, as well as links to some other great simfile sites.

For the guitar, RB1 drums or the Ion Drum Rocker, you plug in the USB and install the 360 driver that Windows will locate. You can also get it here. I've also heard reports of people successfully using 2 drumsets, but my DTXMania would crash whenever I had a gamepad and drums hooked up at the same time, so I doubt it would work for me.

Before we go any further, it should be pointed out that if you own the Ion and a drum brain w/ midi (or any e-kit), you can fully utilize DTXMania without the 360 stuff, as it accepts midi input. Also, with the Yamaha UX16 USB MIDI Interface, you can hook your e-kit up to any JP PS2 to play Drummania.

For those of us going the non-midi route, there are a few problems. For one, the RB1/RB2 drum set, you don't have enough inputs to play DTX/GDA files (songs) without setting something to autoplay. For that matter, to play true DTX files (which support 2 crashes, a ride, open/closed hi-hat, and an extra tom), you would need a real e-kit. Fortunately, there are some settings you can adjust in DTXMania to play in 'Drummania Mode' which allows you to work around this. Under configuration -> System, set the following:

This will allow you to play the crash & ride cymbals on the right cymbal(if you set it up with a crash), plus left crash (not always used) as well as closed & open hi-hat on your hi-hat cymbal, and play the floor tom on the low/mid tom. Even with these adjustments, you still might not have enough inputs, which means that you will need to set either the low tom or the right cymbal to auto. Fortunately, many songs do not use the floor tom. As I mentioned, you don't have to worry about it if you're only playing original Drummania songs.

If you're setting up an RB1 kit, or an RB2 kit with no cymbals, see this video:

For ION Drum Rocker setup, please see the video below:

This is a short video explaining how to use the Ion Drum Rocker with DTXMania. I don't make many tutorial videos so gimme a break. :p

This may or may not work with the Rock Band 2 drums + cymbals. Let me know if you try it.

In the zip below, there's the Glovepie script, written by Madcat, and 'Rock Band & ION to MIDI.exe'. written by dhunter and fixed by Madcat, For some reason it's not working for me @ the moment , so I could only show you the Glovepie solution. If you have questions or comments, post them at GDAMania.net or on the YouTube video.

DO NOT set up DTXMania using the drumset by itself. If you have any buttons that you mapped in DTXMania, delete your config.ini file & start over.

For more information why the IONs don't work without help, see this page:

The original protocol for Rock Band Xbox 360 drums maps drum hits to face button presses on a traditional controller (full details coming soon). The Drum Rocker is intended to be backwards-compatible, so it provides those mappings; however, with the inclusion of cymbals and velocity-sensitive drum pads, much more information needs to be provided. Cymbal hits need to be treated as identical to pad hits for Rock Band 1's sake, so each pad still maps to a face button as before, but cymbal hits need to be differentiated from pad hits for Rock Band 2, so a mask is set up using buttons that went unused in the Rock Band 1 drum protocol to identify which type of item is being hit.'

In short, when you hit 2 drums together, there's a good chance a 3rd drum is going to sound.

The second problem, for most of us, would be the issue of the lane colors and orientation of the hi-hat (if you don't have cymbals). Somebody already thought of that:

Luckily, the graphics files are easily located in DTXMania. With a little shooping, I was able to recolor the lanes and 'chips' (the falling notes). I did it with MS Paint, and I'm horrible with Photoshop, so the bass drum chips are a solid orange. I didn't have the patience to figure out how to recolor it and preserve the color cycling.

You can download my skins here (right click and 'save target as'). If you think you can do better, and you probably can, email me your skins and I'll put them up here & credit you.

On the skins, I omitted the 3rd tom lane completely for one of the versions I did, assuming that RB users wouldn't have enough inputs for all the drums.

There are three pairs of skins and chips. The first I mentioned above. Then there's a version with 1 blue lane and 2 green lanes (for people using FT1 & auto-crash). The third version, with all the colors, should work for A) Anybody using the 'ION Drum Rocker to MIDI' application or B) Anybody hooking up the Ion with a brain & Midi.

On the lane colors, I had tried to play with the hi-hat on the yellow drum, but I initially found it incredibly confusing, because the hi-hat is the leftmost lane and the snare is next.....but I got used to it. For me, pre-Ions, I had to play the hi-hat on the yellow and the snare on the red...I tried it the other way and I just couldn't get the hang of it (especially playing the HH with my left hand predominantly).

The lane order does take time to get used to, but if you play cross-handed on Ions, and have your hi-hat between your snare and toms (the standard location), you get used to it pretty fast.

Using the 360 guitar is not nearly as complicated as the drums. It would be plug & play, except for the fact that the strum bar is seen as a POV hat, which DTXMania won't recognize. For this, you will need Joy2Key. I've included it here (right click and 'save target as'), with my config file that's already set up for DTXMania. Basically, it makes it so that anything you hit on the guitar registers as hitting a keyboard key. It's already set up, except I had to change the 'Pick' (strummer) command to ']', Wailing to 'w', Decide to 'Enter' ('Back' on the guitar) and 'Cancel' to the space bar (Right on the thumbpad). Wailing works with the tilt function, as expected. I didn't map Cancel to Start, because I hit it with my pinky once and accidentally quit in the middle of a song. The note buttons are F2, F3, and F4.

If you want the notes to come down from the top, don't forget to go into Options->Guitar->Reverse, and set it to On.

Anyway, that's all the info I have for now. I hope to add info on how to sort songs in-game, by different categories, and anything else useful I find. If you have any questions, comments, advice or corrections, please email me at 'billkwando' [at] 'yahoo.com'

Drummania is a drumming music video game series produced by Bemani, the musical division of Konami Digital Entertainment, Inc. It was first released in 1999 as an arcade game, then subsequently ported to the Sony PlayStation 2 in Japan in 2000 as a launch title.
DrumMania uses a modified Yamaha DTXPRESS electronic drum-kit for simulates real life drumming. It is played using a controller designed to imitate a drum set. Five pads are arrayed from left to right for the hi-hat, snare drum, high tom, low tom, cymbal and bass drum.

In 2010, a series XG was introduced, adding a floor tom, left cymbal and left pedal to the cabinet set-up. The most recent arcade version is DrumMania XG3, which was released on March 9, 2012.
Drummania Gitadora was introduced on year 2013. The game's songlist has steadily grow with each release, with the final version V8 containing over 500 songs. Songs are primarily in-house original compositions, covers of popular Japanese or English songs or edited master tracks licensed from the artists. (unfortunately all are not drum-less.) Most songs are pop and rock in style, although there are often a wide variety of musical genres available.
DTXManiaPlay-Along simulators
A handful of DrumMania simulators have been created for use on PCs, the most popular of which is open-sourced called DTXMania. It can be controlled using the computer keyboard, any USB device that can act as a joystick, or any MIDI instrument such as a MIDI keyboard or professional quality electronic drum kit.
On PC software version XG & Gitadora, a left cymbal, left pedal and a floor tom are added.
DTXmania works with any edrum kit as long as it is recognized in your computer as a midi input and use as supplement training from a teacher.
DTXmania PC Simfile:
By Bemani/Konami definition, a Simfile is a term relating to any file that represents a song for a specific simulator like Stepmania, Beatmania, GuitarFreaks/DrumMania with Dtxmania using .dtx file extension
https://en.osdn.jp/projects/dtxmania/ 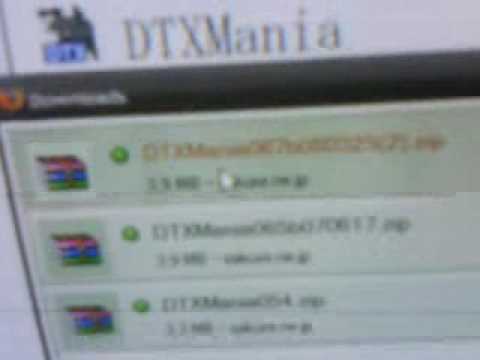 You can play Dtxmania if you do not have electronic drum set (or maybe the set is in the courier service truck, stuck at airport/custom, still with the supplier, getting one later, not getting one as fingers will do for you,...) - by using your computer keyboard.
Ooo.. yaa.. finger drumin' good