When it bowed a couple of years ago, Peavey ReValver MK III guitar-amp simulation software garnered a lot of rave reviews for its tube-like tone and the ability to tweak its virtual electronics right down to the component level (for example, modifying the plate load of its simulated tubes). ReValver MK III.V—a paid upgrade from MK III—adds seven new amps, the Budda Budwah effect and Peavey VCL-2 compressor modules, to the mix. (See Fig. 1.) It also more than quintuples the number of convolution-based speaker simulations to 778, counting impulse responses that incorporate variations on microphone choice and position for the same cabinet.

LOOKING BACK AND FORWARD
For the uninitiated, ReValver allows you to chain together scores of stompbox, preamp, power amp, amp (preamp and power amp), cabinet and effects modules in both serial and parallel configurations. Drag and drop modules allow you to change the order in which they are chained. You can add tone stacks and swap out or add virtual tubes to your amp sims and save the result as a custom impulse response (a stereo, 44.1kHz WAV file) to load into a speaker-simulation module. It’s all very intuitive.

ReValver MK III.V offers both a 32-bit mode for real-time processing and a 64-bit, 4x oversampled “mixdown” mode for bouncing the track offline. (Mixdown mode yields very high-resolution processing, but is too CPU-intensive for real-time use.) Both modes sound great.

So the MK III.V upgrade is all about the new tone palettes that it brings to the party. For that reason, I’ll focus this review on my impressions of the new modules, starting with the Redhot amp.

AMPED UP
The highly musical Redhot amp module emulates the Orange AD30. It has two dual-stage channels. Channel One is a bit brighter and grittier than Channel Two, yet manages to sound ultra-smooth and tube-like, even when pushed hard on rock solos. Channel Two generally has a warm and thick tone that is perfect for cleaner rhythm guitar parts and very pristine arpeggios. But put a preamp module in front of it, and it too can really bark.

The Peavey Sensation 20 amp module is a single-channel affair with a vaguely similar vibe to the Redhot amp’s Channel One when pushed hard. It doesn’t sound as creamy and full-bodied as the Redhot and can sometimes seem a bit glassy on clean and bright settings. The Sensation 20 module includes onboard reverb.

The Peavey Masterpiece 50 amp offers two channels: one clean and the other overdriven. The clean channel gave nicely crunchy chords, but I couldn’t make it sound pristine enough to produce bell tones. The overdriven channel cranked out gorgeous-sounding timbres for lead solos—full-bodied and creamy, with gobs of sustain. It accomplishes this by adding two stages of gain to the clean channel when you activate the module’s Lead switch. On the downside, the module’s onboard reverb was apparently broken: On its maximum setting, I could barely hear any effect, even on a soloed track. (Peavey is fixing the problem in a future software update.)

The Peavey 3120 amp module has three channels: Clean, Crunch and Ultra. I liked this module for overdriven rock tones but not much else. The Clean channel sounded very discordant; I can’t imagine ever trying to use it to coax pristine tones. The Crunch channel easily provided enough overdrive for classic-rock guitar solos but I couldn’t clean it up enough for blues chording. The Ultra channel produced over-the-top but very smooth distortion that sounded great.

Figure 2: The versatile Demon amp module offers three channels that together range in tone from sparkly clean to brutally distorted.

The versatile Diezel VH4 amp module (modeled after the Diezel Demon; see Fig. 2) has three channels, and it offers superb tones ranging from sparkly clean (Channel One) to massively distorted (Channel Three) and all timbres in between (Channel Two). You can get more sustain and attitude with the Diezel VH4 than with the Redhot amp, making it a prime candidate for laying down hard-rock tracks. A global mid-cut control provides far greater attenuation of midrange frequencies than the Middle tone controls dedicated to each channel; it’s your ticket to a heavily scooped sound.

I really love the Drive 18 Series II and Super Drive V20 amp sims. These two modules sport identical control sets. They each provide separate gain controls for their Rhythm and Drive channels. It’s a little harder to coax super-clean tones out of these sims, but you can get there by starving their gain controls almost to the point of killing all sound and cranking ReValver’s output gain in the Title module. The crunchy and overdriven sounds are some of the best ReValver has to offer—warm, smooth and tubey. The Super Drive V20’s Drive channel generally has a thicker sound than that produced by the Super Drive 18 Series II, which sounds tighter and more present.

SPEAKERS AND PROCESSORS
The amp modules’ inherent sound can be modified far and wide using an almost unlimited supply of modeled and convolved speaker simulations. For example, the British Collection of stock impulse responses includes, among many other offerings, single-mic setups for a Redhot cab with a single 12-inch speaker. Your choice of virtual mics includes a Sennheiser MD 421, Royer R-121, Shure SM57 and Neumann U87, placed at zero, two or seven inches from the speaker cone or edge. If you can’t get the tone you want from this deep of an impulse library—not to mention the abundant modeled speakers—it’s time to hang it up and take up clarinet.

The new Peavey VCL-2 compressor module emulates an opto-electronic design. Threshold and gain controls dial in compression or limiting, depending on a switch setting. Placed after the Budda Drive 18 Series II amp module (see Fig. 3) and one of ReValver’s default cabinets, the VCL-2 produced beautifully tight and slappy chords that brought out my inner Doobie Brothers. Inserting MK III.V with only the VCL-2 module loaded on a lead-vocal track, I got decent results: Dynamics were smoothly reined in, but depth suffered a bit more than when using my premium opto-compressor plug-ins.

The Budda Budwah is a stompbox effect modeled from the Budwah wah-wah pedal. While it can’t produce sounds as extreme in range and resonance as ReValver’s legacy Wow-Wah stompbox, the Budwah is much more musical, realistic-sounding and easy to use. Mouse-drag the virtual footpedal left and right to modulate the filter. Turn up the Curve control to make the pedal more responsive for the same amount of travel. Because the ReValver plug-in doesn’t respond to MIDI, I simply automated the footpedal’s action in Digital Performer.

BIG SONIC UPGRADE
MK III.V provides new tone-sculpting amps that, taken as a group, allow you to alternately dial in clean, slightly edgy, mildly distorted and severely overdriven tones with equal finesse. Not every amp is a home run, but together they constitute a grand slam. Add the musical Budwah and VCL-2 modules and the hundreds of new impulse responses of miked speaker cabinets, and ReValver MK III.V presents a very potent allure to both new amp-sim buyers and those looking to upgrade from MK III. 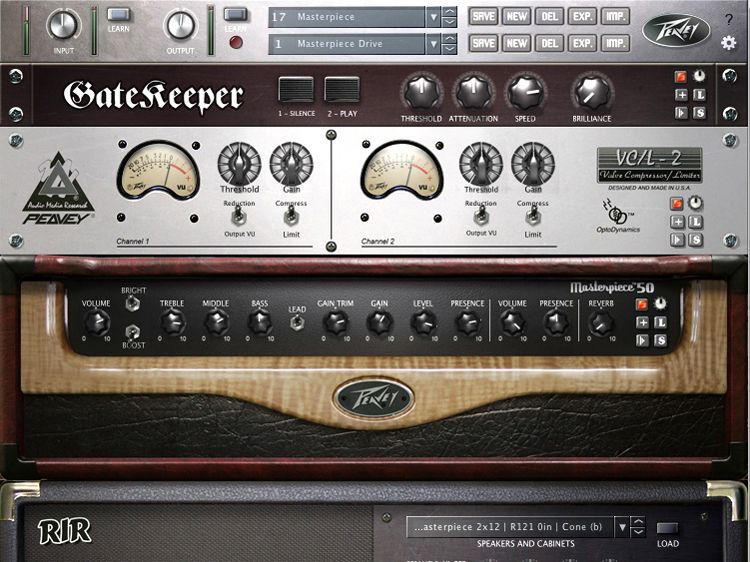