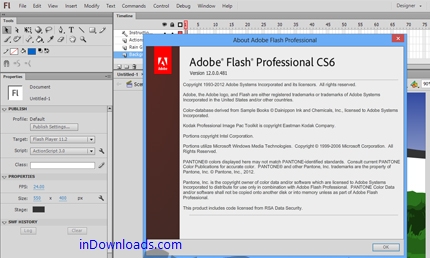 Adobe Flash Professional CS5 is an authoring environment for producing cutting-edge interactive Flash content, for a wealth of different devices and platforms. The CS5 version marked a welcome update to the series for both designers and developers, with several key new features, including a new uncompressed file format, XFl; though you can still choose to save to FLA.
Users can now preview an important video via Stage, and alter its parameters in real-time, with skin and coordinate changes available via the Properties panel. The Code Snippets panel provides easy-to-use access to the snippets of code behind the most common flash functionality.Meanwhile, the new Text layout Framework, templates and Deco brushes all add to make this is a world-class Flash development environment that is bested only by its update in CS5.5.

Pros: Fantastic new features, improved text control, Code Snippets.
Cons: New update available, high price tag, animation focused.
Conclusion: There’s not much to not like about Adobe Flash Professional CS5. The new updates are fantastic. The new Code Snippets panel can really help cut back on coding time and the new sample file templates will give ActionScript-lacking designers a helping hand in advanced projects. The new improvements to text control are also a really great new feature, and though the Smoke Animation tool has limited success compared to the other new Deco brushes, as a whole they’re useful.
Overall, with CS5.5 out there there’s not many who are going to purchase CS5 over it. But either way, this remains a great update to the series, and anyone using CS3 will definitely want to update, though CS4 users comfortable with ActionScript may want to hold off on the investment.